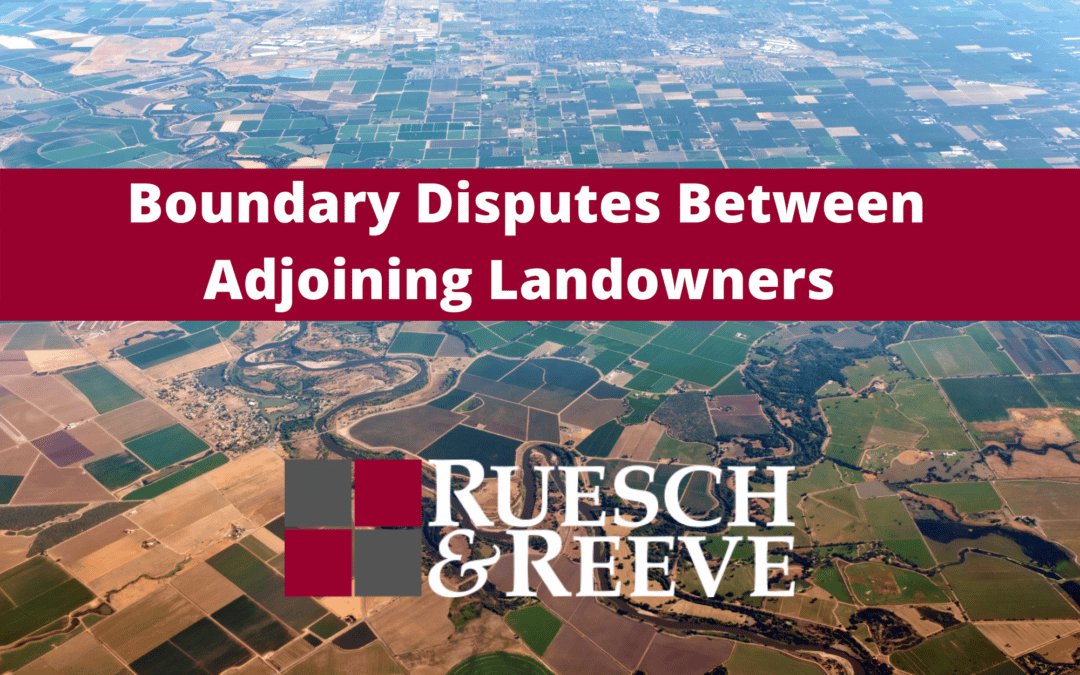 If you own property, somebody likely owns the property next to, behind, and in front of yours.

That’s the nature of the game. And along with that comes the potential for boundary disputes between adjoining landowners.

If you’re fortunate, you’ll never have to deal with this kind of an issue. But unfortunately, there are many people who do – and often at no fault of their own.

That’s why many state and federal laws exist to provide jurisdiction over all the various kinds of boundary disputes.

Let’s go over some of the basic rights and issues that have to do with boundary disputes between adjoining landowners.

An adjoining landowner is a person who you share a property boundary with.

Someone who lives directly next door to you or behind you, for example. It doesn’t matter what side they share.

Where the law is concerned, it’s assumed that people who share a property line will act responsibly and reasonably.

That no one will interfere with the other’s property and invade their property rights.

Anything you do that deprives your neighbor of his ability to reasonably enjoy his property is considered unlawful.

Also, anything you do that appropriates (taking or using something without permission) your neighbor’s property is unlawful.

And, of course, vice versa. (Environmental hazards, zoning laws, and other federal laws must be adhered to, as well).

You can’t create a situation on your property that imposes a dangerous condition for your neighbor’s property.

Even if you’re not appropriating what belongs to them. There are also laws that address the unreasonable neglect of one’s property.

The neglect of one property can negatively effect an adjoining one. But every case is different and is dealt with in a case-by-case manner.

Incidental damage (loss without injury) is often not enough to instigate a boundary dispute.

An inconvenience is different than imposing danger or appropriating property.

As long as it’s happening during a reasonable time of day, it’s allowed. If it’s happening at night or at 5:30 am or something like that, then the neighbor could make a case.

Here’s another example. Say an oil drilling business was up the street from someone’s house.

The homeowner creates a boundary dispute saying that pollution is making its way down the street onto his property.

The oil driller certainly didn’t mean for this to happen and says he’s not committing a wrongful act.

In this case, the court will almost certainly side with the homeowner. If an action on a property is causing physical damage to an adjoining one, this is unlawful.

Another thing to consider: probably don’t physically invade (an unwelcome visit to cause trouble) an adjoining property. The odds won’t be in your favor in a boundary dispute.

Simple complying with zoning ordinances doesn’t shield you from potentially being liable in a boundary dispute between adjoining landowners.

You can comply with zoning laws and still invade a neighbor’s property rights.

That being said, you should always comply with zoning ordinances. Failure to do so could be used as evidence against you when being accused of unreasonable use of your property.

In most states, there are statutes that say a person can have physical access to a neighbor’s property temporarily to make repairs. (A statute is a written law that commands, prohibits, or declares something).

These circumstances often involve the adjoining property owner offering help to bring the neighboring property out of disrepair.

Assisting in the removal of the safety or health threat.

Many areas have regulating statutes pertaining to boundary disputes, designed to prevent them.

These laws are most common in urban areas. They typically regulate things like noisy construction and land restriction.

Before any action can be taken against an adjoining landowner, these local and state laws need to be referred to.

If the offending party is violating any of these ordinances, odds of success will not be in their favor.

In boundary disputes between adjoining landowners, hazardous activities are those that ensure injury liability to another person.

In other words, they are activities that are inherently dangerous. In these situations, it doesn’t matter if the person doing it took steps beforehand to prevent the injury of others.

There are a few factors that go into determining whether or not an activity is considered hazardous.

They include: Is the harm relatively possible? How serious is the potential harm?

Can reasonable preventive actions decrease the possibility of harm? Is the social value of the risk outweighed by the activity?

Is the area where the activity was done appropriate for such an action?

In some areas, strict liability is the basis for these legal decisions rather than negligence.

This means that in a situation where there is no negligence, liability could still be imposed on the person. Another important thing to know involves independent contractors and workers on the property.

Sometimes a worker may engage in definably negligent behavior, imposing on the property rights of a neighbor.

In these cases, the neighbor will likely hold the favor.

Mutuality of Rights and Obligations

Neighboring landowners both have the same liabilities, duties, and rights. Tort law separates these liabilities into two categories: strict and absolute. (A tort is an action resulting in another person suffering a loss which then results in legal liability).

Absolute liability requires only a guilty act when declaring responsibility.

Strict liability comes into play when a person uses an object on their property that is inherently dangerous.

If the use of the object causes damage to the neighbor’s property or injures them, the user would be liable. With or without negligence.

This would be considered an instance involving a hazardous activity as previously mentioned.

A person who owns property must use it properly and reasonably when building structures on it.

Anything constructed on your property must not pose a danger to neighboring properties.

If you want to construct a foundation on your property above the natural surface, it must adhere to regulations.

It can’t use the adjoining property for support of any kind.

Let’s say two women were neighbors – they owned residential properties next to each other. One of them built an additional structure that included a party wall. (A party wall  is a partition built on a property line used to divide two buildings in close proximity).

During construction, materials including dirt were improperly set aside causing sloping damage to the other women’s property.

The woman engaged in construction will be held liable.

She’s certainly allowed by law to build on her own property. But when it comes to a party wall, the wall cannot act as a temporary support for fill. Particularly if it’s higher than her lot’s natural surface.

The same legal outcome will occur under almost any circumstance where one property owner damages an adjoining property.

Even if it’s accidental. Even if the act in and of itself is lawful. An accident will almost always be considered negligence.

If damage or injury happens to an adjoining property or its owner because of something you did, you’re liable.

And you can’t claim that damage only happened because the neighboring property is old (or something similar).

That isn’t a valid defense. Your liability will be based on the fact that you failed to exercise reasonable care.

Also, a wall in substandard condition can be reported as a nuisance or as negligence in many instances.

This phrase refers to a court ordered window of time that you have to repair a hazardous structure.

This is a common ruling in boundary disputes between adjoining landowners.

A neighbor claims a structure on an adjoining property is likely to cause damage to his own.

If the jury deems the claim reasonable, the property owner is given a date by which he must fix it. In other words, a time limit given to remove the hazard.

What if you hire an independent contractor for work on your house and they cause damage to your neighbor’s property?

Liability can depend on whether or not proper agreements were signed by you and the contractor before work began. In some cases, the liability falls on the person who hired the contractor.

Let’s say you hire a landscaping company to cut down a big tree in your front yard.

Proper care is not taken by the landscaping employee and the falling tree causes damage to utility lines.

The damaged utility lines directly provide service to the home on the adjoining property. In this case, the landscaping company will almost certainly be liable.

In another example, say you hire a company to perform pile-driving services on your property.

Underground damage occurs that causes damage to your neighbor’s property.

In a circumstance like this, you need to make sure you know zoning laws so you’re not breaking them. If you are, even unknowingly, you will be liable.

There are circumstances where certain construction work is considered out of your – and their – control. Their meaning the construction company. These situations are unusual and rare. But we mention this in an effort to be thorough.

How To Approach A Boundary Dispute Between Adjoining Landowners

As a property owner, make sure that you do your best to live in a state of cooperation with your neighbors.

When it comes right down to it, fencing off your neighbor can seem unnatural in some ways.

But you certainly need to maintain control of what you own, property or otherwise. Being a good steward of your property includes being responsible concerning adjoining land owned by someone else.

Be respectful and reasonable in your property-related actions and dealings.

And with that has come a long list of statutes. Some at the state level and some at the federal level. Because of the unique nature of each boundary dispute case, controversy is often the result.

This is why it’s important to remember not to become too emotional if you find yourself in a boundary dispute.

Common sense can go out the window if emotions get the best of you.

Property rights are perhaps the very foundation of our liberty in the United States.

So when these rights are threatened, we have the tendency to let our tempers take the light. If a potential boundary dispute begins to make itself known, ask yourself if it’s worth it.

Often it is. Sometimes a confrontation with a neighbor is inevitable. Adjoining property owners sometimes act unreasonably and you have no other choice but to get the courts involved.

But if you’re properties value is at stake due to damage or the threat of damage, you have to act.

If you must act, make sure you do so in a timely fashion. Don’t wait.

But sometimes it isn’t worth it. You be the judge. Know the property-related statues in your state and act accordingly.

Is the money, time, and relationship with your neighbor worth it? It might be. But don’t rush in with fists clenched as your default reaction.

For further information on boundary disputes between adjoining landowners, call us. We’d loved to answer any further questions.

Boundary Disputes is a specialty at Ruesch and Reeve.

Our experience allows quick responses to your questions, quality service, and prompt attention.

We are even able to issue title insurance policies through Attorney’s Title Guaranty Fund.

We are committed to providing cutting-edge legal services and creative legal planning. Let us at Ruesch and Reeve Legal help you today