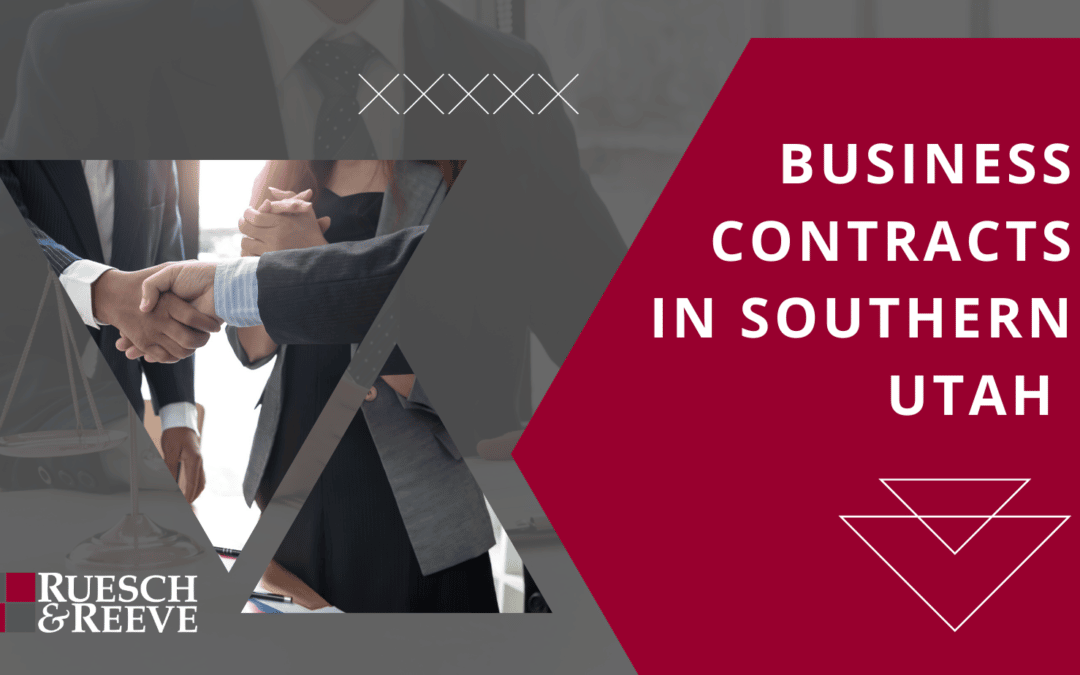 When going into business with someone, it’s essential to draw up a business contract to ensure both parties agree to the terms of the business relationship. Ruesch and Reeve can assist you in creating business contracts in Southern Utah.

What is a contract?

A contract is a legally binding agreement between two or more parties specifying what each party will or will not do. A contract may be entered with a simple verbal agreement or an intricately written document, but they both must meet specific criteria to be deemed enforceable.

Oftentimes contracts don’t see the inside of a courtroom and you may feel like your business transaction can survive on a verbal agreement, which can be legal in certain situations; however, if a problem does arise, a written contract will protect both parties.

The elements of a business contract

Parties of the business agreement refer to the individuals involved. They must be listed by name, which may mean the legal name of the business they operate under, and whether they are a customer or a vendor.

The party who signs their name on the contract is considered a signatory. If the party signs on behalf of another or for a business, they are considered an authorized signatory.

These four essential elements of a business contract are what relate to the agreement itself. Each contract must include an offer and an acceptance of that offer. Both parties must consent on their free will and agree to the same terms. The terms must be specific including what services are to be performed, at what price, by what deadline, under what circumstances, and what are the expected results? The contract must also include consideration or something of value for each party. The thing of value may be money or services, but both parties must give something to the other party. These four elements are meant to create a binding agreement.

Both parties signing the contract must be able to comprehend what is required of each of them. Neither party can be under the influence of drugs or alcohol while signing the contract, and neither can be mentally deficient. As a rule, minors cannot enter contracts, save for a few exceptions (basic necessities, taxes, education, for example).

The business contract must be created for a legal purpose. It cannot be used for an illegal business, like drugs or prostitution. If the contract is based on illegal purposes, it will not hold up in court if one party accuses the other of breaking the contract.

The terms of a contract may affect the execution and success of the agreement, which include the particulars about whether the contract can be terminated by a party, by whom, and under what circumstances. Additional terms may include whether the agreement can be transferred to another party or not, how disputes are negotiated, which state’s laws the contract must be enforced under, what legal mailing addresses and contracts are to be used, and whatever other terms the parties require of one another.

The contract must include the date it was signed.

The three following additional clauses are often included in a contract but are not legally required.

An arbitration or Mediation Clause specifies how any future disputes or misunderstandings will be handled, either with a mediator or a third-party independent arbitration.

A Force Majeure Clause (sometimes known as an Act of God Clause),  states that if a catastrophic event happens outside the control of either party, such as a fire or earthquake, the contract cannot be enforced.

An Entire Agreement Clause clarifies that whatever is written in the contract is what each party has agreed to and nothing outside the contract will be applicable.

It is vital for individuals in southern Utah who are considering creating a business agreement to reach out to a lawyer with Ruesch and Reeve for any questions regarding business contracts in Southern Utah.

Businesses don’t frequently sign a lease contract, but in the case, it is needed, it can cover parking arrangements, maintenance expectations and security deposits, and whether pets are allowed on the premises alone or not. It is also important to take note of if the contract requires the lessee to obtain tenant’s insurance and maintain upkeep and property alterations.

A sales contract is the most common business contract because every sale or purchase needs a legal agreement. Sales contracts give details about how goods, properties, and services are sold, purchased, returned, and transferred. An example of a sale contract is a bill of sale.

Employment contracts are what set the terms of an individual’s employment. It covers services for hire, dog walkers, distributors, independent contractors and sales reps. It also includes a termination agreement when someone is fired. Non-disclosure agreements are a type of employment contract that companies use to protect themselves from the liability of employees. Non-compete contracts prevent a valuable employee from being poached by a competitor. There may be other examples of employment contracts, but these are the most common ones.

It is recommended that businesses that use contracts on a regular basis look over them every-so-often to ensure it still upholds the current law.

When is a verbal contract legal?

Although a verbal contract is legally binding as long it meets the requirements, it will not be easy to bring to court because the initial agreement is not in writing. A verbal contract brought to court turns into a “he said/she said” situation and is difficult to enforce.

When is a written contract required?

It is vital for the parties entering into a contract following the requirements, otherwise it may cause problems if it is every brought to court. For example, if a party involved in a contract takes the other party to court, but the parties did not abide by requirements for a written contract, the court may not view it as a legally enforceable contract.

For any questions involving business contracts in Southern Utah, lawyers at Ruesch & Reeve can help clarify the requirements of a contract and form a draft and provide a review of the contract to ensure it is enforceable.

Benefits of a written contract

Individuals going into business with each other may believe it is unlikely that a misunderstanding will arise, so they rely on handshakes and oral deals instead of creating a written contract that holds each party accountable.

Advantages that come with creating a written contract that is legally enforceable include:

For those looking to draw up business contracts in Southern Utah, it is important to carefully read all the requirements and recommendations of a written business contract and reach out to lawyer with any questions and when you want to draw up a contract.