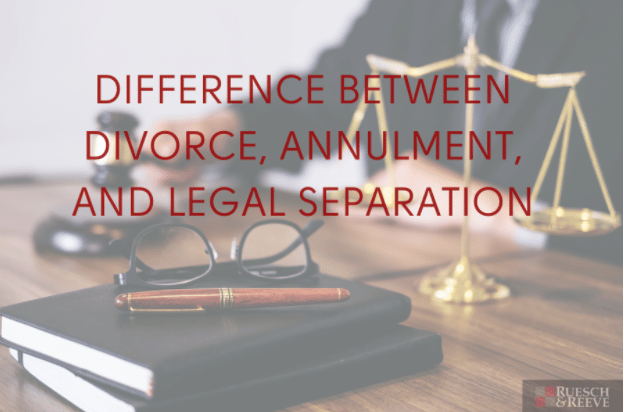 What is the difference between divorce, annulment, and legal separation?

There are a lot of factors that can contribute to the decision to end a marriage. The most commonly reported reasons for failed marriages are financial struggles, poor communication, infidelity, and domestic abuse.

However, when a couple decides to end their marriage, there are options. Whether it be for religious, moral, or legal reasons, divorce is not a suitable option for all couples. Depending on circumstance, a legal separation or an annulment may be a better option.

In this article we break down the difference between Divorce, an Annulment, and Legal Separation, and help with finding a divorce attorney in Hurricane, Utah.

Divorce is the most common way to end a marriage.

As a matter of fact, recent studies show that between 40 to 50 percent of marriages in the United States end in divorce, and that number is steadily rising as years pass.

That being said, divorce is legal in every state of the United States, with only slight variations in what the process is. Prior to pursuing a divorce, it is crucial to understand what exactly that process will look like.

Firstly, divorces are recognized nationwide, but a couple may only get a divorce in their state of residence.

There are two different types of divorce that couples can decide to pursue:

A fault divorce is the more complicated option, as a divorce attorney is usually involved. At Ruesch and Reeve Law in Hurricane, Utah, that’s something we specialize in.

However, a fault divorce is more appealing for some people as it does not require a separation period prior to the legal divorce. The spouse who is determined to be at fault typically gets less alimony, less of the marital property, and less custody of the children (if any are involved).

Generally speaking, a court will rarely deny requests of divorce, regardless of whether both spouses are interested in ending the relationship or not. This is because many would consider it cruel and harsh to force a couple to stay married when both parties do not consent to the union.

However, one potential downside of a fault divorce is that the accused spouse can argue that he or she is not at fault, which can lead to a lengthier divorce settlement.

Instead, the spouse must report why the marriage is not working out. The most common answer is incompatibility or differences that they are not able to overcome.

A no-fault divorce is appealing to many because it is usually more straight forward, especially if the couple remains cordial enough to work out some of the details of their separation without the help of a divorce attorney.

If possible, this is the more financially responsible route, as the couple does not have to pay for the extra legal fees in hiring an attorney to figure out which spouse is entitled to which assets.

In some states, it is also required that the couple separates prior to the final divorce. This is used as somewhat of a “cooling off” period for couples, to determine whether they truly want to end their marriage or if there was just tension in the relationship that could be resolved with some time apart from one another.

When an Annulment is Needed

An annulment and a divorce are both means to end a marriage, and the process is similar, but they are very different.

An annulment is the least common way to end a marriage, and that is because annulments are only granted on a case-by-case basis and the inquiring couple has to meet very specific criteria to be approved.

One reason a marriage can be annulled is if the couple’s religious beliefs contradict with the decision to end their marriage, and this varies depending on which religion the couple may follow.

Annulment may also be granted in cases of incest or lack of consent, among a few other reasons.

The general appeal behind annulment is the privacy and concealment aspect.

If you were to decide to end a marriage with divorce, the marriage is still acknowledged in the eyes of the law. However, if a marriage is annulled, it is essentially treated like it never happened.

What is Legal Separation?

Another route which is frequently pursued by married couples looking to end their relationship is a legal separation.

Some couples may want to remain legally married for similar reasons to what was mentioned early, mostly religious or financial, but want to end any romantic or personal relationship they have with one another.

In this case, the couple can pursue a legal separation. The court will split their assets and divide their property for them, and the spouses will still receive alimony or child support just like if they were to pursue a divorce.

The only major difference is that a divorce is not granted.

A legal separation is not to be confused with a trial separation, in which couples considering divorce spend some time apart before making a decision on what their next step should be.

A trial separation may also lead to a permanent separation, where the couple decides to live their individual lives apart from each other without legally ending their marriage.

The fact of the matter is not every marriage lasts forever. There are many factors that can lead to the downfall of an otherwise successful marriage.

There is no shame in wanting to end a marriage, but it is absolutely crucial that parties seeking the means to end a marriage know the extent of their options so they make the right choice for their circumstances.

At Ruesch and Reeve Law, we have a divorce attorney ready to help you through the process. Whether it’s divorce, an annulment, or legal separation. Contact us today!