Who Should Get a Prenup? 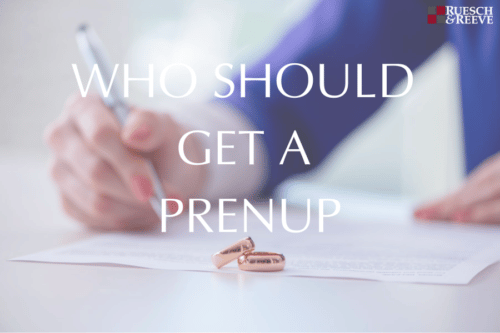 When it comes to a Prenuptial agreement, most have the misconception that they’re only for people of wealth. This is incorrect and though they are often used for those marrying into wealth, or vice versa. That doesn’t mean prenups have no benefits for those of more modest financial situations.

When a prenup is examined in court, they’re gone through with a fine tooth comb. It’s important to create a clear, legally sound agreement. If you create the agreement yourself, we at Ruesch & Reeve Law Firm suggest having lawyers review it. If not, at least briefly go over it with you. You want no reason for courts to dismiss its validity in the future.

So, who should get a prenup? Whoever wants to secure their financial assets. With a past negative stigma attached to the subject of obtaining a prenup, it’s slowly becoming increasingly popular for couples of all tax brackets before marriage.

What is a Prenuptial Agreement?

Before two people get married, something they might want to take into consideration is creating a prenuptial agreement. In simpler terms, a prenup is a written contract that technically states all of the assets, property, debts, etc., that each person carries.

Along with these lists, they come to an agreement that specifically delegates all of the rights to these items each individual gains in the event of a divorce.

An estimated half of marriages in the US end in divorce.

So, it’s not totally crazy and definitely shouldn’t be frowned upon. A lot of individuals see a prenup as a lack of trust from their spouse. Thinking there’s doubt in their marriage and it’s future.

Obviously no one goes into marriage thinking they’ll ever separate. At least look into creating a prenup before dismissing the option. Coming to a prenuptial agreement is just a safety net for those with something to lose in the event of splitting up with their spouse.

If you, or your future spouse are deliberating this premarital contract, it’s a good idea to compare the benefits and also the downsides of prenuptial agreements first. Then decide from there whether or not it’s right for your relationship and what each individual withholds.

Benefits of a Prenup

When it comes to making the choice of getting a prenup before marriage, or not, there are a lot of benefits to consider.

One of the most important things in a marriage is communication. Even if you decide not to follow through with contracting this premarital agreement, it has still opened the door to hard conversations that should be had before getting married.

Bringing up conversations in a relationship that discuss these hard topics such as: finances, properties, assets. These are never easy discussions to have, but they shouldn’t be swept under the rug. Combining these things can be difficult to navigate when joining lives together through marriage.

So, yes it may be daunting for either side to bring up. But starting a marriage off with a strong foundation and open line of communication decreases the chance of problems in the future. Creating, or even just speaking about the contents of a prenup will save you both from future stresses and help to build a trusting, open relationship.

Having a contracted prenup helps couples during divorce to overcome some of the most strenuous legal hurdles. Saving both sides time and money when they don’t have to battle in court for a resolution.

On top of creating an open plan for your futures and having open communication, following are more common reasons to consider. For those wondering who should get a prenup and what it may benefit:

When you first think about marrying someone, it’s easy to ignore the possibilities of divorce. Many people are quick to think that there’s no reason to bother because they don’t think divorce is possible for them.

They fail to realize the protection it provides in the event of a possible divorce. You don’t want to come out of a failed marriage with less than you deserve, especially after having a legal battle over it.

Now, who should get a prenup and what are its benefits? Anyone who could benefit from protecting above situations. Making sure that no spouse gets favored over the other during a divorce.

Divorce Without a Prenup

Whatever you and your spouse decide aftering wondering who should get a prenup, or not is ultimately up to you. What is also important to understand is the protection you could be losing in certain areas of your life after divorce.

Understanding both sides of who should get a prenup, or who shouldn’t worry about it is important. Before you make your decision, educate yourself on all of the facts.

If you don’t draft a prenup before marriage, the fate of your assets and debts succumb to the hands of your state and it’s court system during divorce.

Divorce affects more than just the two spouses. If there are any children involved between the marriage, more things become important to clarify in case of separation, such as:

Getting divorced without a prenup in place creates an unsure future of where your finances will end up when separated.

For devvying of properties and assets to be guaranteed even, we at Ruesch & Reeve Law recommend having two separate attorneys go over each spouse’s documents.

While there are some free DIY options available online for prenup documentation, those aren’t guaranteed to hold up in court. To make sure you meet all of the legal requirements, contact the experts.

At Ruesch & Reeve we specialize in family law and many other areas. Make sure you find attorneys that practice in more than just general business. When deciding who should make Prenuptial agreements, Ruesch & Reeve will help you make the right decisions.